The New Zealand - Detroit connection. Electro Empire presents the Auckland based duo Go Nuclear and three new versions of their debut release hit song Techno World. The undenieable influence from early Detroit Electro classics by the likes of Model 500, Cybotron or AUX 88 aside, this well and originally crafted production offers catchy old school vibes with a powerful modern twist. The remix by Detroit's Filthiest (aka DJ Nasty, Digitek, 313 Bass Mechanics) - a true Detroit talent who has been keeping it real since the nineties - rebuilds the song in powerful TechnoBass / Ghettotech style. Turn it on, turn it up and... Go Nuclear! 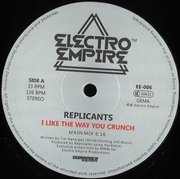