Following on from the success of their first EP on Wah Wah 45s, released earlier this year, South London Afro-dub warriors Soothayers return with a myriad of remixes from some of the UK's finest producers, and some of their most talented friends and family.

Lead track from their previous EP, Blinded Souls, gets a foursome of very different re-works. South coast dance floor destroyer Titeknots follows up his energetic remix for Dele Sosimi with more bass worrying tropical house mayhem, hugely influential producer from the Worldwide Family, SMBD AKA Simbad, provides both a classic disco-house mix and a subversive rolling future Warrior Dub interpretation, and very much part of the family, Miles Wu-Lu (son of Soothsayers front man Robin Hopcraft) comes through with a throbbing Afro-electronica gem of a remix.

Elsewhere, magnificent club-jazz workout Eagle Song is transformed into a meditative 115bpm electronic beauty for the more discerning dance floor by Albert's Favourite Deoke, AKA Dave Koor, and the righteous Refugee is served with a suitably sultry dub from Resonators producer Darren Jamtone.

Add to that an instrumental, percapella, radio edit and dub of the Titeknots mix and a bonus dub of Roll River Roll and you've got one rather hefty package!

Soothsayers will be celebrating this release with a full live show as part of a Wah Wah 45s special at The Bussey Building on September 29thwith guests Dele Sosimi, Hector Plimmer and Wah Wah 45s DJs, as well as a live set from new signings, Honeyfeet. 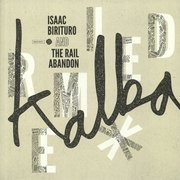