A multi-platform production that explores the overlap between the digital and the organic through field recordings of Inuit throat singing may sound, on surface level, to be something that is a rather niche. However, Zoe Mc Pherson's exploration of this world on String Figures is a deeply rhythmic, immersive and forward-thinking piece of electronic- leaning music that remains just as danceable as it does experimental.
The album is fundamentally one of duality, exploring the traditional and the contemporary, organic and electronic, audio and visual, history and the future. Rooted in this duality is also a core theme around string being one of the most ancient and playful art forms and the seemingly infinite possibilities it offers in terms of shapes, structures and figures lines up with this as a trans-global art project. One that over time will involve video art, choreography, 3D motion design, macro film, instrumental and electronic sound. Although for now is being presented through an AV performance, films and a record with Mc Pherson collaborating with director Alessandra Leone.!
Over the seven tracks (which are laid out as chapters) the record explores glitchy electronics, dub-tinged grooves, polyrhythms, and a huge array of instruments that takes in quiet blasts of atonal sax alongside wonky synths. This of course cross-pollinates with the throat singing and experimental field recordings to create an utterly inimitable sonic sphere. For Mc Pherson it's about mixing worlds, histories and timeframes and she uses a 1991 quote from Laurie Spiegel to hit home how she has elaborated upon this original thought of history and future overlapping. 'Folk music is considered anonymous common property in a culture and that's what a lot of computer music and other kinds of music data may end up becoming.' However, there's also a purer reason for the exploration of these worlds and colliding them together. 'Basically I thought that electronic music that is only digital is a bit boring and as I'm connected to jazz music for many reasons, I wanted it to sound organic: real instrumentation, field recordings.' 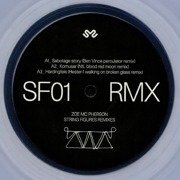