'String Figures Remixes' is a series of remixes released on December 14th 2018 following the previous-ly highly acclaimed LP String Figures by Zoe Mc Pherson. (Watch her Boiler Room live show) Remixers for this EP include Ben Vince (Hessle Audio co release w/ Joy Orbison & Where To Now solo album where collaborators include Mica Levi & Rupert Clervaux), N1L (Opal Tapes & UIQ), Hester-1, Bartellow (ESP Institute, Public Possession) & Sukitoa o Namau (First Terrace Recordings). The EP is pressed on transparent vinyl & comes along with transparent sleeve. When asked why Zoe chose each artist for her remix album she writes: Ben Vince is my mate since he opened for my release in London last April and he was really excited about making a remix. Which I think is even nicer is that he only remixed and did not play saxophone. He actually properly very much remixed all the elements, all recognisable, which is a delight to listen to when you know all the parts seperately. The only thing he did is making it a UK club banger track !!!! :) N1L is a friend whom I admire totally for his capacities of producing incredibly wicked tracks in no time. He's got 10 000 collabs going on ( abit like Ben). I don't know how he does it, but damn his remix is also one of these that are a delight to listen to when the samples are re organised in a very cool way which is his own. Hester -1 is also a friend, violinist and producer from Antwerp. She is a nerd, her style and projects are developing, we jammed together, and I wanted her to be on the original album, so now she is in the remixes and made a very dark piece and now I'm thinking she should meet N1L :) Bartellow is also a friend, behind SVS, and he was the first one to make a remix in 1 hour on a flight I think actually even before the album came out!!!! He had already made a proper groovy banger, as he always does, with his style. Sukitoa O Namau I've been chatting with since a while, she's an incredibly inspiring artist, releasing on First Terrace records, she used to be a dancer and is an explorer of sound and of many things. She basically fucked up my track, by changing the rythms into no rythms and purifying it very much which reveals other things. Only keeping rough elements of it and I think it's absolutely brilliant. 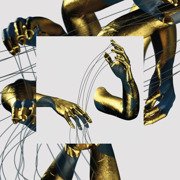