On own imprint Jimi Tenor releases a 4 track 7" for Kati Juurus' film Cinema Dadaab. While in the field of Jazz-Funk it has a pinch of avant garde, and more than a little touch & texture of the Middl East. Resembling stady late 60 jazz, but melodically travelling towards psychedelica and most of all eastern tonalities it's a combination of traditional, crafted and compact story telling. 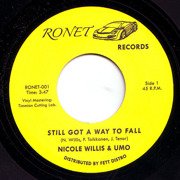 Still Got A Way To Fall