Ot to not to is the experimental RnB recording project of Virginia natives Ian Mugerwa and Noah Smith - These are the remixes!

Ot to not to is the experimental R'n'B recording project of Virginia natives Ian Mugerwa and Noah Smith. In 2016, Mugerwa released the first Ot to Not to LP Goshen through Nicolas Jaar’s OTHER PEOPLE imprint after being discovered by Jaar in 2015 while recording. Goshen was a very deliberate effort to create an R'n'B concept album that explored aesthetics and recording methods usually more associated with European experimental electronic music. More specifically, it was an effort to subvert tropes in pop R'n'B, whether those be the stereotypical, sterile cleanliness of radio R'n'B or the safe themes and song structures. Forthcoming LP "It Loved to Happen" will be released March 1 and is preceded by a remix 12 featuring abstract interpretations of tracks by Xiu Xiu, Carlos Nino, Ben Chatwin & Machinefabriek. 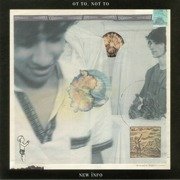 It Loved To Happen