Ernest Hood’s Neighborhoods was released some two decades after the Portland, Oregon born and raised musician’s first forays into field recordings. These very recordings, and those captured over intervening years, define the universal sound and aural images of childhood, a theme memorialized by Hood’s privatelypressed opus of 1975.

Sprawling through a haze of zither, synthesizer melodies, and foraged pedestrian sound, Neighborhoods is both a score and documentary composed and directed by Hood to offer, in his words, joy in reminiscence. Hood’s nostalgic impulse ran parallel to the developments of other artists, writers, and filmmakers of the 1970s who were looking back to the 1950s to convey a collective memory of childhood. Unlike some of the widely embraced work of this nature, the music of Neighborhoods eschews irony or detachment for lucidity, striving above all for a dream-like return to the details of sensory memory.

Born into a musical lineage, Hood’s early, promising career as a guitarist in a globetrotting jazz outfit was cut short when he contracted polio in his late twenties. Moving from guitar to less physically-demanding stringed instruments in the late 1940s, Hood first began implementing field recordings in his jazz ensemble collaborations as early as 1956. In 1961, Hood and trumpeter Jim Smith collaborated on a local Portland television program, with their large, tight ensemble providing breakneck contemporary jazz for an action painting by famed West Coast modernist painter Louis Bunce. Hood incorporated his own field-recorded sounds of birds in the performance – an element that would resurface in Neighborhoods with great abundance among other found sounds. 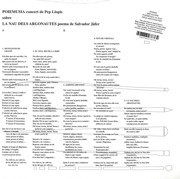