Club Internacional unearth more long lost Brasilian grooves from the archives of Rio imprint Top Tape for lovers and collectors around the globe.

This edition kicks off with the funk-driven sounds of Melo Do Fricote by Band' Azul.
Fusing rapturous vocals, guitar and horns this track originally appeared in 1982 and was the band's only 45 single release.
Here it is in its original format at last.

The flip side features the much more established artist and celebrated guitarist Octavio Burnier. As one half of Burnier & Cartier he produced one of the most sought after LPs in Brasilian music in 1974, which became like gold dust to collectors of Brasilian music. It was recently reissued by the excellent Mr Bongo to the relief of all lovers of Brasilian sounds.

In this later solo track 'Que Nem Sol', Burnier demonstrates his exquisite guitar playing as well as his talents as a composer and singer.
A seriously delicious slice of soft boogie funk it was released only on 45 single on the Top Tape label back in 1980, and again has never been repressed. 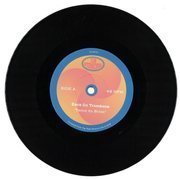