James Stewart met Ghanaian kologo musician Ayuune Sule, after booking several shows of kologo music star King Ayisoba in Lyon. Stewart was quick to witness the bluesy tone of Ayuune’s voice and his kindness as a musician, despite his impressive stature. Quite logically, Stewart invited Sule to record vocals on two of his ongoing demos at Bruno Patchworks’ recording studio (Voilaaa, Mr. President, Da Break), with the idea of making a rather unheard crossover between traditional kologo music and contemporary styles that would both appeal to Ghanaian crowds and a Western audience. Stewart then had a number of his arrangement ideas re-recorded by a talented cast of musicians, resulting in a brilliant mix of acoustic and electronic textures, sounding both vintage and modern.

Nodding to Eddie Palmieri’s landmark record “Harlem River Drive”, “Atlantic River Drive” is a stomping dancefloor track, drawing from the 6/8 feel of kologo music and the energy of contemporary club music. The track can be read as a tribute to the musical cross-pollinations between the African continent and its many diasporas, which Stewart has dedicated a long part of his life to, but also as a more intimate story about his life and family. All words were written by Stewart and then translated by Sule in his native Fra fra language from Northern Ghana.

“Where Are We Going?” is a two-part journey that reminds us that we should care about each other, about our communities while we don’t know what the future is made of. An important and much welcome message to navigate through these troubled, uncertain times. Referencing congolese N’dombolo tracks, the track has two parts and rich arrangements, with its first part going deep with syncopated clarinet hooks and playful percussion parts, and its second part moving to a four-on-the-floor pattern and an entrancing baritone saxophone solo.

The EP also features Worldwide FM and Brownswood maestro Simbad, who delivers two dancefloor-ready reworks of the track “Where Are We Going?” under his SMBD moniker, turning it into a spiritual, dubby journey, as well as an emotional house music track. 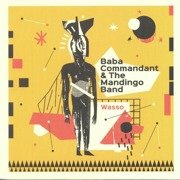