After the big success of the reissue of MBG EP ONE, Groovin Recordings is proud to introduce the release of OPTIK Music Harmony & Rhythm, another great EP originally released in 1991 under MBG International Records. Optik is the alias of Giorgio Canepa and Ricky Montanari, two of the most talented italian producers from the early '90s italian underground-house movement. In this EP we find two killer deep-house tracks, Music Harmony And Rhythm and Illusions, two great examples of the italo-house touch of the early '90s that we found in a lots of other productions by MBG, Don Carlos and Key Tronics Ensemble, to name a few. Illusion is also sure an epic track, it was the last disc played at Vae Victis (Misano, Italy) and the first disc played at Novenove (Gradara, Italy), two of the most famous italian after hours of the 90's era. Fully re-mastered, DMM cutted, re-pressed & re-released for 2015 in it's original format from the original mastertapes, with the permission & participation of all rights holders with all original MBG label artwork intact. 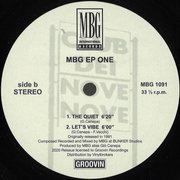