Finest French jazzy beats "JAZZ LIBERATORZ", their 1st single "What's Real" featuring Aloe Blacc, who was also featured on Avicii, which was suddenly released in 2003 and later released on Stones Throw has finally become a 7-inch vinyl! B-side is a the single "Music Makes The World Go Round (2004)" featuring great talent of the West Coast underground "Declam", this is a special version which is remixed by 20Syl who is the MC / track maker of Hocus Pocus, France. 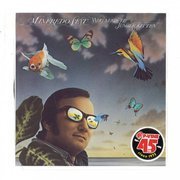 Who Needs It / Jungle Kitten