Continuing his journey, the former member of Egypt 80 and last trumpeter of the Black President Fela Kuti releases his second album: APP (Accumulation of Profit & Power).

Muyiwa Kunnuji and his band Osemako, which has been extensively recasted since Moju Ba O - which had already laid the foundations of his afroclassicbeat - have had quite an evolution, and are eager to share a recipe that has been patiently elaborated and stewed, both on stage and in the studio.

A complex mix of deep musical and cultural heritages as well as a claimed and combative Pan-African culture, APP sets the bar still one step higher in the message, but also and especially in terms of composition and polyrhythms. Inspired by Western African highlife as well as the purest afrobeat of the Afrika 70 era, and even incorporating elements of South African marabi or Central African soukous, the whole does not sound less perfectly personal, tailored, with a natural and disconcerting ease.

But this easiness is only an apparent as Muyiwa devoted himself body and soul to the composition and harmony during the gestation of these tunes so widely inspired and yet intensely personal.

APP will thus delight fans of African music in the broad sense as well as connoisseurs, and just as much fans of funk grooves or jazzy solos; it is a deeply plural album. Multi-influenced, multicultural, multilingual, a slice of life as much as an initiatory journey, on which hovers the spectre of Covid, which has also largely inspired this second ‘effort’. Standing against absurd sanitary rules or the accumulation of profits by the powerful of this world and other pseudo-philanthropists, APP, again, reminds us of the great Fela, as much by the use of an acronym to entitle the album as by the themes addressed or the mixing of genres. A warrior album, filled and full of revendications, but also of calls for open-mindedness. An intensely human, sincere, combative album, and however radically enthusiastic and optimistic. 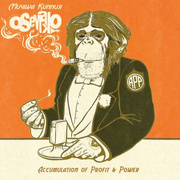