The vision of techno is presented by seven producers from electronic music scene of Poland.

The well-known artists - Blazej Malinowski i Michał Wolski, who work intensivly over new productions, promote polish scene abroad with liveacts ans dj sets, are resposible for radio broadcasts on which they bring valuable information in relation to electronic music to the listeners.
ISNT, a very well know female dj and promotor, who has recently started producing hypnotic techno productions.

Less known, and deeply dark, developing project - the OBKT, which is the result of the cooperation of two well-known dark techno producers Milena Kriegs and Eastern Renaissance.

Together with them on the compilation, the lesser-known producers are completing and emphasizing the character of the compilation, Nternal Bserver (read: Internal Observer), who has already released several EP’s and single tracks abroad, and who focuses on playing varied and heavier
sound during liveacts. TRNAH, a female producer with a lot of experience on musical collaborations, who shows with her charming song, that a techno album containing more powerful and hypnotic sound can also be filled with nostalgia and exceptionally captivating sadness. 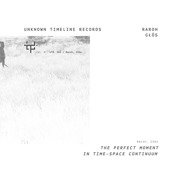 The Perfect Moment In Time​-​Space Continuum