Totally unique and basically undiscovered Ethophian synth groove single by blind keyboardist Haile Mariam G. Ghiorgis. 500 copy press - fully licenced release which comes with a thick high quality picture sleeve. Tip! . As a first release on this newly founded label, here's two totally unique and undiscovered Ethophian synth groove recordings by blind keyboardist Haile Mariam G. Ghiorgis. Both tracks are taken from the highly collectable and extremely rare debut solo album 'Tigill Lemenor (Survival)'. An album that Ghiorgis released privately in 1985 on his own Pentaton label. Born in Ethiopia in 1952, Haile M. Ghiorgis originally worked as a music instructor after school and played music together with several prominent groups of his countrymen, he was the keyboardist of Mahmoud Ahmed & Ibex Band and played for national stars like Tilahun Gessesse, among others. Due to the communist revolution in Ethiopia in 1974, Haile decided to leave his motherland and he was allowed to leave the country due to his blindness in 1977. Finding a new home in Hamburg, he performed together with various bands, including the afro pop group Soulful Dynamics and Jah Love (an early band of funk drummer and reggae artists Curvin Merchant aka Jamaica Papa Curvin). When those groups disbanded, Ghiorgis was retrained as a piano-tuner but also focussed on his own music. Haile M. Ghiorgis was particularly fascinated by the digital-controlled synthesizer and rhythm-machines, whose operation he mastered without any difficulties in spite of his blindness. The drums came from a Yamaha drum computer and were recorded first. On top of that, bass and the melodies were added. Haile was using a Yamaha DX-7 keyboard, an old small Roland synth as well as an organ by Solton. On the album, which was recorded in his small home studio in Hamburg on a TEAC 8-track tape machine, Haile M. Ghiorgis harmoniously blends western pop and jazz music with his native country's folklore. On the A side, 'Man biye?' is a sort of melancholic love song, it means 'What shall I call you?'. A man searches for something though in vain to compare with the beauty of his beloved. The atmospheric instrumental features brilliant synth solos over deep downtempo beats, sort of like jazzy ethno synth funk in slow motion. Side B of the single is the uplifting disco track 'A Happy Disco Song'. As it says in the liner notes of the LP, the song esteems Ethiopian hospitality and relates how welcome every stranger is and how even the poorest is ready to share with him. The track got a charming 'private' vibe and surely should appeal to DJs and disco/boogie aficiandos. The original LP 'Survival' was primarily sold on live shows when he was on tour in the late 1980s throughout Europe, accompaning fellow Ethopian musicians including jazz legend Mulatu Astatke, among others, and almost never pops up. 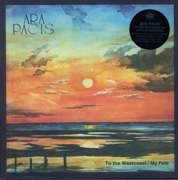 To The Westcoast / My Fate