Richard Hell and the Voidoids’ Blank Generation is an iconic album that has influenced countless rock bands with its image, its attitude, and its blistering performances. Released in 1977 on Sire Records, the album was received ecstatically by critics such as Lester Bangs and the New York Times’ Robert Palmer (who called it one of the ten best albums of the decade), but as was the case with most original “punk” albums, it wouldn’t get mainstream recognition for decades. Now its place in music history is secure as one of punk’s most significant records. Recently, Rolling Stone magazine lauded Blank Generation as one of the “40 Greatest Punk Albums of All Time,” giving the innovative and literate band its well deserved credit on the cusp of its 40th anniversary. This seminal album is being recognized on its 40th anniversary this year with limited edition double-CD and double-LP deluxe editions to be released on Record Store Day’s Black Friday. Produced for release by Richard Hell, the album has been expertly remastered—by Greg Calbi of Sterling Sound, who mastered the original LP—as well as restored to its original 1977 track listing and sleeve imagery. BLANK GENERATION: 40th ANNIVERSARY DELUXE EDITION includes a second disc, with previously unreleased, alternate studio versions, out-of-print singles, and rare bootleg live tracks from the band’s first appearance in 1976 at CBGB. The booklet also contains many previously unpublished photos of the band by Roberta Bayley (the renowned CBGB photographer who shot the LP’s original cover), a revealing essay by Hell along with compelling images from his notebooks and private papers, and an extensive new interview with Ivan Julian by Hell. After establishing his reputation as founder of legendary bands the Heartbreakers and Television, Hell went onto to lead the Voidoids which included Robert Quine (who later played in Lou Reed’s Blue Mask band, as well as for Tom Waits, John Zorn, and many others), Ivan Julian (who would record for Matthew Sweet and numerous other artists) and Marc Bell (“Marky Ramone”). Along with the Ramones, Television, Blondie and Talking Heads, Hell and his band helped to define the early New York “first wave” punk scene. The song “Blank Generation” became a slogan and an anthem and later was emulated by the Sex Pistols for their track, “Pretty Vacant.” Such songs as “Love Comes In Spurts” and “Blank Generation” were originally recorded at Electric Lady Studios, but were re-recorded prior to release at Plaza Sound during Sire Records’ transition to Warner Bros. Records in 1977. At Plaza Hell reworked the album, leaving behind alternate versions and outtakes from Electric Lady that now appear on the second discs of these deluxe editions. The music sounds as fresh and abrasive today as when it was first released. Hell retired from music in 1984, refocusing on writing as his vocation. He’s the author of two novels and several books of nonfiction including his acclaimed autobiography, I Dreamed I Was a Very Clean Tramp. 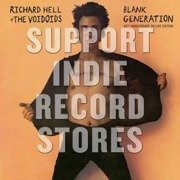