Introducing the debut album from The Sorcerers. Recently championed by Ethio-Jazz legend Mulatu Astatke on his Addis Abbaba radio show, The Sorcerers take influences from Ethiopiques Ethio-jazz as well as the soundtracks to the european horror films of the 60's and 70's and the british library music of the same era & blend them into one cohesive package. Made up of various stalwarts of the vibrant Leeds Jazz/World scene they were originally formed to contribute some tracks to the compilation "Funk, Soul & Afro Rarities: An Introduction To ATA Records" released in 2014 on Here & Now Records. After receiving a favourable response to their contributed tracks and garnering support from the likes of Strut records founder Quinton Scott and Radio 3's Nick Luscombe (Late Junction) they decided to develop their sound further before recording their debut album.

Recorded at ATA Records' own analog recording studio using vintage analog equipment from the 60s and 70s, the album contains 8 original compositions that reference influences as diverse as Mulatu Astatke, Moondog, Kpm and Giallo soundtracks. Huey Morgan made the opening track "Pinch Of The Death Nerve" his "Beat Of The Week" on his BBC6 Music radio show with more airplay expected at the time of release. Mulatu Astake played the album on his Addis Abbaba radio show with further uk radio support has so far coming from Wah Wah 45's Dom Servini on his "Unherd" show, Shawn Lee on his Soho Radio show and Gilles Peterson. 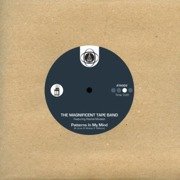 Patterns in My Mind / Golden Shades