Addis 1988 is the document of a moment in time when Mulatu Astatke was not yet the global Ethiojazz superstar he is today, but a change was gonna come for him, and for the whole world. In Ethiopia, the Derg had started to tumble and fall; Europe saw the wall between East and West gain more and more holes until it came down; Southern Africa witnessed Apartheid taking its final lap before Nelson Mandela was finally set free. With Ofra Haza's Yeminite Songs and Mory Kanté's 'Yéké Yéké' high on the international charts, music of the wider world finally entered the house of Western pop, giving high hopes and deep inspirations for many musicians who were previously excluded. Fuelled by Mulatu Astatke as artistic director, composer, arranger and collaborating musician, Ethio Stars and Tukul Band's Addis 1988 recordings vibrantly sustain the innocence of these musical originators, yet hold up to modern standards with timeless aplomb. The album also helps to fill a gap: the period when Mulatu and his music were largely forgotten outside of his homeland. First released in1992, available for CD only and out of print for many years, Addis 1988 is now remastered and available as limited edition on vinyl for the first time, a stunning reissue 180 grams for audiophiles and collectors. 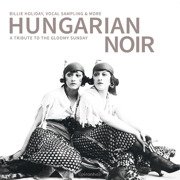 Hungarian Noir: A Tribute To The Gloomy Sunday