“Lumiraum” is a neologism, the suffix AUM included in the title, according to the Hindu tradition is the basis of their ethical and spiritual conception.
Its meaning involves the passage and overcoming of four levels of knowledge that are expressed by the three letters A-U-M, plus the extension of the M as maintenance of the vibration.
Operating in a similar way Lukasz and Mirco through sessions of various kinds have taken a similar empirical path through improvisation, coding, editing and re-elaboration and finally mixing.
Recalling in their imaginary the spirituality of ancient cultures, symbologies and concepts that had analogue cosmogonic conceptions of origin of the universe. An imaginary that slips into a remote and anachronistic world.
“Lumiraum” also means a space of light, a circumscribed place in which a message is received and from which a spark arises, an idea. 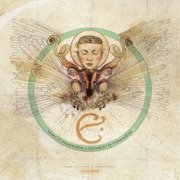